Hello readers! With December Tingles all done last week, I didn’t know what to write until I jokingly told my sister “Wouldn’t it be nice to get an email saying you’d won the lottery?” Well, the email idea brought another one and I’ve started out this piece, which, honestly, I don’t know where it is heading (thus the horrible title) but it looks like it's on the road toward the paranormal. Oh, by the way, I used picture prompts and included 2 of them into the story.

Enjoy, and as always don’t forget to stop by the other Briefers blogs to read more awesome tales.(links below!)

It all started with that email, an email with a few words and a black and white picture of her street. 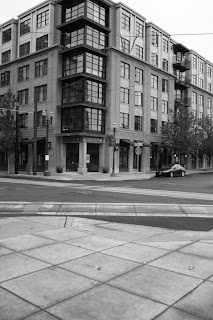 There are things you should know
The distance between us seems to grow
But you're holding on strong
Oh how hard it's to let go, oh so hard to let go

She didn’t. Perhaps she’d been lonely for too long, or perhaps she’d finally gone mad like everyone said she eventually would, but Clare replied to the email.

Every night she’d log on to her laptop to see an email from him. The subject never changed. The sender never altered. For weeks, she received an email with an image and a few words. The pictures were all related to her in some way: the street, her work place, the park she had to walk through every day, the subway station, her favorite coffee shop, the clothes store she liked to browse…The words belonged to lyrics of her favorite songs.  Music that touched her soul and meant something to her, words that she knew by heart and loved.

She took it as a game. One of those addictive puzzles people got obsessed with, like Sudoku’s or Angry Birds. It was their little thing. He introduced the song and she’d complete it. She didn’t realize it at first, but as the days sped by she discovered herself looking for him in shadows, wondering, where he was and how he could snap those pictures. He had to know her habits, had to know her routine. It should have scared the living daylights out of her. Instead, she found it charming, fun. She had her own personal stalker. Any person with a right mind would have already gone to the police. She waited for his next message. It arrived as it always did, around midnight. The witching hour, her mom would probably say with disapproval.
Excitement coursed through her as she clicked open the message. She stared.

I'm waiting for you to open your arms.

She knew that rusty iron door. Knew the jungle of leaves behind which it hid, knew the cracks in that grey brick wall. She shivered as unpleasant memories filled her mind. Her gaze dropped to the words: I'm waiting for you to open your arms. They belonged to a song titled “It’s all Tears”. An omen?

Clare hesitated, for the first time. Her fingers poised over the keyboard as she contemplated on replying or not.Her heart skipped to her throat and she jumped slightly in her seat as the chime of her inbox startled her.

Automatically, her hand grasped her mouse and she scrolled over to see what had arrived.

From: M@dmailfactory.com
Subject: Open your arms and let me show you what love can be like

Taking a deep breath, she clicked it open.

Love doesn’t come without pain but I promise not to shred your heart.

She gaped at her screen. Her pulse was erratic and nerves fluttered in her stomach and over her chest. Those were not the words to any song. She swallowed. Her gaze froze over the name below the promise: Mikelo. The rules of the game had changed.

As a side note, the lyrics above do belong to real songs. They’re from my favorite band ever, Finnish Love Metal band, HIM. The first one is titled “Your Sweet Six, Six, Six” and you can listen to it here. The second one is “It’s all Tears” and you can have a go at it here.

Email ThisBlogThis!Share to TwitterShare to FacebookShare to Pinterest
Labels: Clare, HIM, Wednesday Briefs