Happy Thursday readers! Today I've got talented author Marie Medina stopping by with her latest release Your Money or Your life, a  hot escape into another time... but I'll let her explain. Welcome Marie!

Thank you for having me today! I am very happy to share a little excerpt from Your Money or Your Life, book 2 in my Tales of the Highwaymen series. This trilogy was not meant to be one at all, but I loved two of the secondary characters so much that I simply had to give them both their own story and happy ending. All Mine, book 3, will be out January 30, but for now enjoy this steamy excerpt from book 2. 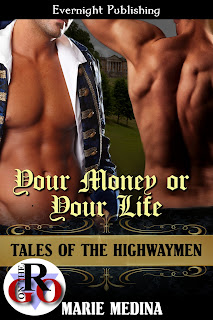 When Jacob fell moving a portrait in the museum where he worked, he was worried about damaging it. He never imagined he would fall into it and wake up in another dimension. Though his day does start to improve when a sexy masked man rides to his rescue…

Gerard thought his friends Adam and Eloise would be the enchanted portrait’s only victims, but when he finds a gorgeous but bewildered young man wandering in the woods, he realizes how wrong he was. Now he has to enlist the help of a man he can’t stand to put a stop to the magic, even though he’d much rather be spending that time in the arms of the sexy man now sharing his home.

Gerard couldn’t understand the world his new friends had come from. So many things sounded wonderful, but at times the cruelty of their world shocked him. “I’m sorry. You were afraid of being shunned or persecuted?”
Jacob nodded. “I never told anyone I was gay until I met a guy I wanted to date, usually. If I knew he was gay and knew he liked me, I’d let my guard down. I wasn’t ashamed, but I didn’t want to be judged. My town was very small, and no one who came out stayed long because the reaction in town was so bad. I moved when I went to college, and I was starting to feel confident about coming out.” He shrugged and looked around the room. “And now I’m here.”
“You’ve no need to fear anything here, I can assure you.” Gerard smiled. “And anyone who wanted to harm you in any way would have to get through me first.”
“So, you’re going to be my permanent champion? My dashing outlaw?”
Gerard guffawed. “Outlaw? I’m not quite that.”
“Aren’t you a highwayman? I asked about your mask, and Adam and Eloise said you were.”
“But not really an outlaw.” Gerard considered his statement. “All right, I do steal from people, but it’s not what you’re thinking.” He searched his brain for the name that Adam had mentioned several times. “I’m like Robin Hood.”
Jacob smiled. “Are you, now?”
Nodding, he said, “Yes. There’s a large gap between the very rich and the very poor here. There’s the king and the nobles, and then we have everyone else. There is very little social climbing, as Adam called it. I try to help where I can. We never take jewels or personal items, just money. And only from those who will not miss it. A few actually cooperate because they know the truth.”
“How many are in your gang?”
“Actually, without Adam, it’s just me for now. My men tend to retire when they get married. They need more stability in their lives and their incomes.” Holding up his hand, he gestured around. “The family that lived here abandoned it, claimed it was haunted. Hardly anyone will even come near it, so I live here comfortably enough. No one objects. I do odd jobs here and there, but most of the families I’ve helped see that I am well taken care of.” He grinned. “Got lots of other men’s wives cooking for me.”
“Sounds like an almost charmed existence, in its way.” Jacob laughed. “So, you’re looking for new recruits?”
“Are you volunteering?”
After a long pause, Jacob nodded. “Sure. What else am I going to do? It’ll at least be a way to repay you, earn my keep.”
Gerard raised one eyebrow. “All right, though I had several inventive ideas for how you could earn your keep.”
Jacob looked down for a moment, and then he slowly glanced back up. “Maybe you can enlighten me.”
Gerard tried his best to rein himself in and hoped Jacob would not notice his half-mast erection. “One night when you’re stronger.”
Jacob smiled as his eyes lowered again briefly. “But you have to keep me awake tonight, remember?”
The look in Jacob’s eyes had Gerard hard and ready in an instant. “I wouldn’t be a gentleman if I took advantage of my guest in such a way.”
Jacob moved closer, running his hand up Gerard’s thigh but stopping before actually touching his groin. “True, I’m probably not up to … certain activities … but it seems you’re ready for anything.”
“It’s been a while.”
“For me, too.” Jacob cupped him, but he wasn’t too aggressive. He ran the palm of his hand over Gerard’s shaft, locking eyes with him.
“We just met today. I don’t want you to regret this.” Gerard didn’t want to regret it either, didn’t want to care for a man and not be able to keep him again. But Jacob’s touch was like heaven.
Jacob examined Gerard’s leather pants, and then he began to unlace them. “These pants have been driving me mad ever since I first saw you. Even when I was confused as hell, they were distracting me.” He freed Gerard’s cock and stroked it. “I’m tired of hiding and being timid, denying my desires. I do not want a gentleman—I want the fantasy that rode up and saved me today.”
Gerard laughed low in his throat, arching up a bit as Jacob worked his cock. He wanted those lips wrapped around him, wanted to fuck that tempting mouth. “I don’t think I’ve ever been called a fantasy before.”
Jacob stroked harder, still looking into Gerard’s eyes. “Trust me. Compared to every other man I’ve been with, you’re exotic and exciting, a very wet dream come true.”
Gerard cupped Jacob’s face and ran his thumb over his lips. “Suck me off. I’ve been thinking about it ever since I pulled you up onto my horse.”
Jacob smiled and licked the head of Gerard’s cock. “I felt your cock against my ass. I think that’s what kept me from going crazy, grounded me to reality.”
Gerard started to reply, but then he groaned as Jacob’s mouth engulfed him. Their banter had him aching, and Jacob’s mouth was hot and sweet. Gerard couldn’t believe this amazing man had called himself timid. He knew how to suck cock, bringing Gerard right to the edge but then easing off in a sweetly tortuous way.
Jacob’s tongue teased up and down the vein on the underside of Gerard’s cock. He ran his fingers through Jacob’s chestnut brown hair, loving the way the man moaned as he sucked. Jacob seemed to be enjoying himself very much. After Alexander’s betrayal, Gerard had believed he would never be able to inspire this kind of desire, but Jacob was proving him wrong.

Email ThisBlogThis!Share to TwitterShare to FacebookShare to Pinterest
Labels: Evernight Publishing, Marie Medina, Romance on the Go, T n T's Confidential, tales of the highwaymen, Your Money or your life