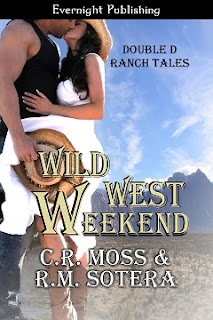 C.R. has just launched together with author RM Sotera a  hot series around cowboys and ranchers: Double D Ranch

How did you come up with the idea for the Double D Ranch series?
It all started with a trip I went on where I stayed on a working ranch. There were ranchers/cowboys who actually wore the hats and chaps, horses, trail rides, campfires, cattle, and food cooked outside. My muse started asking, "What if?" When I returned home with a handful of ideas, I went to RM and said, "Guess what we're going to write about." She was a bit worried about pulling it off not having been there herself, but I had taken a lot of pictures and then we placed ‘our ranch’ in the area we live in. A few tweaks here and there and the Double D was born. As for the rest of the ideas for all our stories, they came about from a lot of brainstorming.

Your novel Wild West Hauntings is a collaboration with another author (RM Sotera). What drove you into this enterprise?

As RM once said in another interview, “We'd written another set of books together, and co-authoring this project just seemed like the logical thing to do once we did a lot of brainstorming and started verbally laying down (the first) story. We had a blast dreaming up the Dougan brothers, and then adding two heroines that could bring the men to their knees or kick some ass, was an awesome feeling.” We’ve since added the second book and are working on three more.

How was the process of writing with another author?

Here’s a snippet from a joint interview we did awhile back which covers our process of co-authoring:

CR: It’s amazing when something clicks and our teaming up together did just that. RM defines our partnership best & I agree with her…

RM: Many people have asked me what it's like to work with a co-author. I do believe my answer surprises many. One would think that two authors, both striving for creative freedom, would find it difficult to work together. I am happy to say that I've found the opposite to be true. The creative relationship that I share with CR Moss is what I believe to be a once in a lifetime occurrence. As soon as we are in a room together or on the phone and we start brainstorming ideas for stories, the creative sparks fly hard and fast. Sometimes, I'm unable to process as fast as we spit out the ideas for stories. We just have that connection. We respect each other, and when an idea doesn't work, we file it for another time. Value and respect, commitment and willingness to accept change - this is our mantra. When the idea of Wild West Weekend came about excitement drove us to pump the story out. It went through many revisions before we both knew it was ready. We had a blast dreaming up the awesome characters and the magical place they call home. I know we are extremely humbled and happy by the positive reviews and comments that have come our way - both about the book and our writing styles. I know, and I believe I speak for both of us, we have so much more planned for our readers and the Wild West series.

CR: That’s not to say that co-authoring is easy. Sometimes we hit snags with keeping facts straight, since in essence (for Wild West Weekend) we co-authored two separate stories and then had to make sure they were entwined together at the right places to make it one book with three parts.

RM: And another challenge was not living near my writing partner (yes, we live in the same city but at opposite ends) so that when we needed to do edits I could run next door. And, I was going through some other things in my life that had my writing time extremely limited.

What is your greatest challenge when working on a manuscript?

It can vary as to the story I’m working on. Sometimes I find the sex scenes a challenge in that I want to make sure there’s enough emotion and flow to it so it’s not so clinical. Other times it’s making a word count I want to hit. Then there’s the research and making sure things are as factual as possible.

What are you working on now?

I’m currently working with RM on the third Wild West book. I’m also working on a story that I’m targeting for Evernight’s Naughty Fairy Tale line. There are also a couple of short stories, and there are a number of ideas lined up for my other pen name.

Let’s get personal! Tell me your favorite:

·         Food ~ pizza
·         Color ~ blue
·         Ringtone ~ Depends upon who’s calling me. I have different rings for different people.
·         Film ~ Oh boy. I have a number of favorite films depending upon the genre, but I’ll share one that deals with writing: “Stranger than Fiction”
·         If you could pick one place to take a holiday in, where would it be? Why?
The Mexican Riviera. I could get to some of its cities by cruise line. I’ve been to the east coast of Mexico, now I’d like to visit the west coast—for real this time. (On one trip, due to the swine flu scare, the ship we were on sat off the coast of Ensenada, and we were never allowed to disembark.) I’d love to see the Pacific Ocean and the beaches further south of what I’ve seen at the southernmost point of San Diego and off the coast of Ensenada.

Thanks for having me on your blog today! 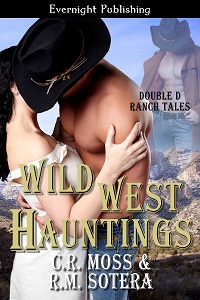 Blurb for Wild West Hauntings: In life and the afterlife, on the Double D Ranch one belief holds true—the power of love changes lives.

With cowboys, ghosts, modern day women, hot dreams, pre-wedding relations and a bit of sexy time travel, life promises to be one wild time on the ranch again.

Rachel Star has met the man of her dreams … literally. Too bad he’s a ghost. When true love crosses boundaries from dreams to reality and across time, the Double D ranch is the place it happens. It takes the love of a man from the past, Dalton Dougan, to bring love full circle in the present for Rachel.

Bristol Ashcombe, soon to be Dougan, is ready to have her baby … and so is a poltergeist. Can the love of a woman for her man and child sustain her during the most horrible of terrors? Can the love between family and friends really dispel the evil haunting them?

An excerpt from Wild West Hauntings
Rachel snuggled deep within the confines of the down comforter, relaxed and content for the first time in months. Relieved to no longer have to cram for exams, write research papers or defend her thesis, she sighed, then closed her eyes. The travel time from Newark to Las Vegas, Nevada had been longer than expected due to storms, winding her nerves tighter than they already were. It was nice to finally settle down, stop moving and cease thinking. Within a few minutes, she drifted into a familiar dream world.
Subtle fragrances of leather and sandalwood filled the air. His memorable scent encompassed her. An eternity without him, or what seemed to be that long, ended as her dream lover drew near. A serene smile played at the corners of her lips. Dalton, it’s been awhile, she purred in her mind.
Behind her, the bed and covers shifted. He settled his body against her. Restless throbs of desire pulsed through her as she molded against him, wanting to be as close to him as possible. He nibbled on her earlobe and snaked his strong arms around her. Warm breath wisped over the side of her face.
“My star. My lovely wife. How good it is to have you in my arms.” Lips brushed her jaw just below her ear, sending tingles down her side and arm.
A quick burst of panic shot through her. This seems to be more than a lucid dream. Rachel reached behind her, with a cautious sweep of her arm and hand, hoping to find empty space.
She didn’t.