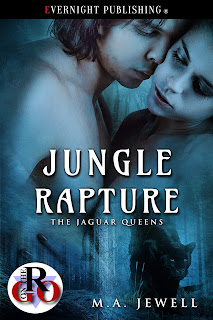 An advocate for endangered species, journalist Kelsi Gorman travels to the Brazilian Amazon to locate a mysterious black jaguar the size of a saber-toothed tiger. Instead, the enormous cat finds her knee deep in mud, blood, and smugglers.
Jaime Salazar, one of a few surviving all-male jaguar shifters, encounters a scent he never thought to find –female jag shifter. Jag queens exist only in the elders’ stories, but someone staked out a she-cat like poacher bait.
In a fit of primal instinct, Jaime marks Kelsi as his mate. Now, no other female will arouse him. To avoid a long celibate life, he is forced to woo his reluctant mate-to-be. But first he must keep her alive.

Buy it now at:

Excerpt:
Jaime stayed silent in the face of her outburst. With a deliberate nod, he stood. She guessed him to be about six-foot-four. He toed off rubber boots that appeared way too small then lowered the zipper of his pants. Kelsi gasped before looking pointedly at the damp earth.
"I must disrobe or go naked the rest of our hike. Don't look away. It's essential you know me as I am."
Kelsi jerked a nod. Her sanity rode on this next minute. His pants dropped to his feet, and he stepped from them. Her gaze followed the perfect, masculine form of his calves to his thighs. She gasped again. Still seated, she got a full frontal of the healthy weight at his groin.
Uncut, interesting. She forced herself to look him in the eye. The half-grin returned. He may be some unearthly, were-something, but he was still a typical man.
Jaime dropped to a prone position. "I'll lie still in cat form. So you feel safe."
"That's thoughtful." Kelsi couldn't keep the sarcasm from her voice. Likely, he played her like some pervert exhibitionist. Although, he did have goods worth looking at.
"Remember, I cannot harm you. You are—special."
Before she could ask what he meant, Jaime grimaced. His body shimmered with a dark light that grew beyond his form. The nimbus cast a beast shape around his body, darkened further, then melted away.
Kelsi's strangled yelp cut the air. She scrambled back from the massive jaguar lying in Jaime's place. Black Beauty. The cat settled his muzzle on his front paws and raised amazing blue eyes to her. True to Jaime's word, the beast didn't move a muscle.
Kelsi froze in wonder. If the dart drug did this, she'd know eventually. But wow, what a ride! Her knees sank into the damp earth as she crawled on all fours to the cat.
"Hi there, Black Beauty. Such a pretty boy."
The lush fur, so close, called to her. As Jaime predicted, the jaguar's sedate manner gave her a sense of safety. Ferns near his nose quivered in time with his regular breaths. She reached a hand to his neck and slid fingers into his pelt. Aside from leaning into her touch, the animal didn't move.
Kelsi edged closer. She reveled in the nearness to the great cat. Like a child who couldn't stay away from a fluffy kitten, she ruffled his ears then leaned in to nuzzle his fur. His luscious scent further soothed, melting away any remaining angst.
"Thank you for saving me," she whispered. Fully into the fantasy, or her delirium, she lay next to him and stroked his side.
Black Beauty blinked and lifted his face to hers. He flicked his whiskers before the tip of his tongue dabbed her nose.
She giggled. A visceral part of her wanted the magnificent animal to accept her touch. All those times the big cats approached her—unusually interested in her over the other zookeepers—she'd yearned to tousle their ears or ruffle their fur. Logic never allowed her to indulge.
Petting the cat, she couldn't help the smile that split her face. "You're amazing."
White light rose from the jaguar's form enveloping her hand. While the glow hid his body, fur turned to bare skin under her touch. The halo of light receded. With that same knowing, half-smile, Jaime propped his head on a raised elbow and turned to his side. "So are you, anjo."
His arousal lay prominent, front and center, along his abdomen. Kelsi's mouth froze in an "O". A beat too late, she yanked her arm to her own personal space. Heat flushed her cheeks and other hidden parts. 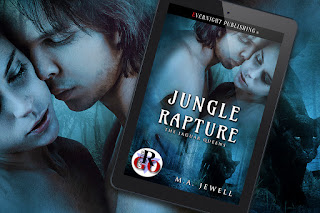 M.A. Jewell started writing after a satisfying career as an operating room nurse. An avid romance reader for many years, she traded in her reading addiction for a pen to write in her favorite subgenre, paranormal. Now, she can’t stop.

Memberships in Romance Writers of America, Nebraska Writer’s Workshop, Nebraska Writers Guild, and the Omaha Romance Critique and Writing Group have helped her build skills in the craft and make wonderful friends in the writing profession.

Omaha is still her home, where she enjoys her own happily ever after with her biggest fan and supporter, her husband Jim. Their two sons have fledged and married lovely, competent women. Just don’t ask her to see a picture of her first grandson, unless you have an extra twenty minutes.

www.majewell.com
Posted by Elyzabeth M. VaLey at 12:00 AM