Out of the ordinary- Christmas magic, reindeers and more in today's #WeekendWritingWarriors #mm #LGBT #romance #Christmas

I can't believe it's Christmas already! It's my favorite time of year! Today, I've chosen a snippet from one of my Christmas stories, "Out of the Ordinary".
Enjoy and have a wonderful Christmas day!


PS: I'll be traveling early tomorrow morning and will be away visiting family, so I won't be sharing any snippets for the next two weeks. Have a wonderful end of 2016 and start of 2017!!! Best wishes to all!

~ ~ ~ ~ ~
He watched as Bill removed his chains and rings
and then flung his shirt aside. Dolph stared in awe at Bill's
muscled back. Etched on his flesh was a lush green forest.
The leaves were so intricately designed that Dolph itched to
touch them and feel their soft texture. Dolph's mouth parted
as he realized that there was more to the wilderness than
foliage. Hidden amid the trees, looking at him with large
brown eyes, majestically—albeit silently—commanding
the woods, were reindeers. Dolph gasped as Bill turned
around and he caught a full glimpse of his chest, something
he'd failed to do earlier, in his desperation.

Bill grinned. "Out of the ordinary," he said, running
his index finger underneath the bold sentence sitting in the
middle of his chest, beneath the tattoo of reindeer antlers
that reached from one shoulder to the other. 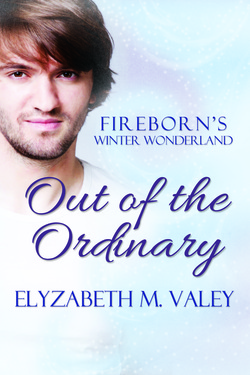 When twenty-two year old Dolph arrives in Christmas
town, he only intends to stay for a few days, especially with
his secret in tow. However, when Bill and his herd turn up
for the contest that will choose Santa's next sled pullers, he
can't bring himself to leave. With his heart hanging on a
line and his feelings for Bill evolving swiftly, Dolph will
have to decide if he wants to join the herd or continue his
life as a solitary shifter.
At first sight, Bill's herd meets societal convention, but
on closer inspection, the team of eight doesn't exactly
follow the rules. When Bill meets Dolph and his body and
soul react to him in ways that are out of the ordinary, Bill
knows that he must have the young reindeer in his life.
With the help of his herd, a plan develops. Yet, with only
three days before Christmas Eve, will they be able to
convince the younger shifter to stay with them forever?