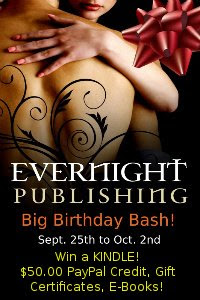 Evernight Publishing is celebrating it's 1st year anniversary and it's invited all of us to join the celebration. Wohoo!

"A Decade of Longing" is not due for release until November but meanwhile you can acquire some other great titles at Evernight. Besides, on the 1st of October and only on the first, ALL e-books will be 75% off on the Evernight Website!!

But, my friends, there is more! At the end of the week Evernight will choose one commenter from EACH participating blog to win a $5.00 Gift Certificate. In addition, they will choose three separate commenters from ANY of the blogs to win one of three grand prizes:
Wohoo! Prizes galore! But there is even more! Among those that answer the question below I'll draw out a name and give out a PDF copy of my upcoming novel "A Decade of Longing". (As soon as it's out that is. So whoever wins will get it hot out of the presses! ;-)

Read the blurb and answer the question: How many years have passed since Alexander and Angelica last saw each other? 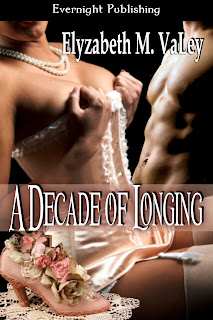 Angelica and Alexander fell in love at a young age. Unfortunately, their love is doomed since the beginning. Forcibly separated, Angelica is obligated to marry another man at her father’s convenience while Alexander is prohibited from ever seeking her out again.

Ten years later, however, Alexander is no longer the callow boy he used to be. Now an influential gentleman, he is bent on recovering the only woman he has ever loved. No matter the cost. But has their love withstood the ravages of time?


Don't forget to leave your name and email address so we can be in touch if you win!